After a whirlwind 18-months of learning a new skill, training and competing, Jenson will line up with some of the UK’s best tumblers in Liverpool in September.

Before January 2016, Jenson had never received any gymnastics training or taken part in a competition, but after deciding to join Bedwas Gymnastics Club at the age of 10 he developed a natural ability for Tumbling. 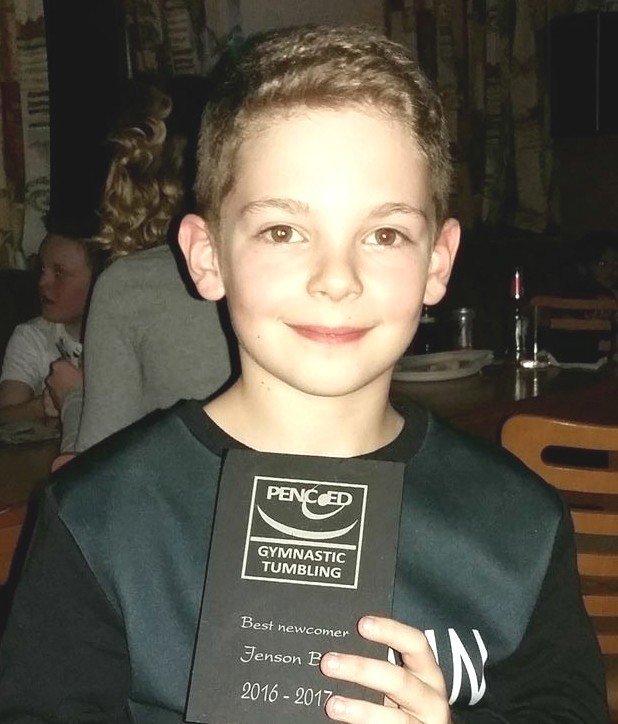 The team at Bedwas noticed Jenson had taken extremely well to Tumbling in a short space of time, and put him forward for the Welsh Novice Agility competition, in which he competed at Level 4. Novice Agility is a development competition specifically for Tumbling, and the event last July was attended by coach Jamie Evans who was shortlisted for Sport Wales Young Coach of the Year.

After having seen Jenson take part in the Novice Agility competition, Jamie requested that he join Pencoed Tumbling Club immediately so he could begin some coaching. As a result of Jenson’s fast development in the discipline, he was encouraged to skip the NDP competition altogether and head for the British Tumbling Championships at FIG Level.

During the first round of the Championships at Nottingham in April, Jenson fell just outside of the qualifiers, but the second round in Sheffield this June saw him coming 5th overall. He is now headed for the British Tumbling Finals this September in Liverpool’s Echo Arena, and is really looking forward to competing as part of the final 16.

Although he has only been training since last January, Jenson has shown a very strong natural talent for gymnastics and is working incredibly hard to get ready for the finals this September. His only experience of gymnastics growing up was using a trampoline in the back garden to teach himself the basics, and yet his quick development in recent months has led many people to ask whether he has been practising for years.

He has loved training with the Welsh Gymnastic teams at Bedwas and Pencoed, and his family believe that having such a supportive network around him, as well as some great coaches to encourage his development, has really contributed to Jenson’s whirlwind success so far.

Other gymnasts who have qualified for British Tumbling Championship are:

Everyone at Welsh Gymnastics wish the team the best of luck in September.