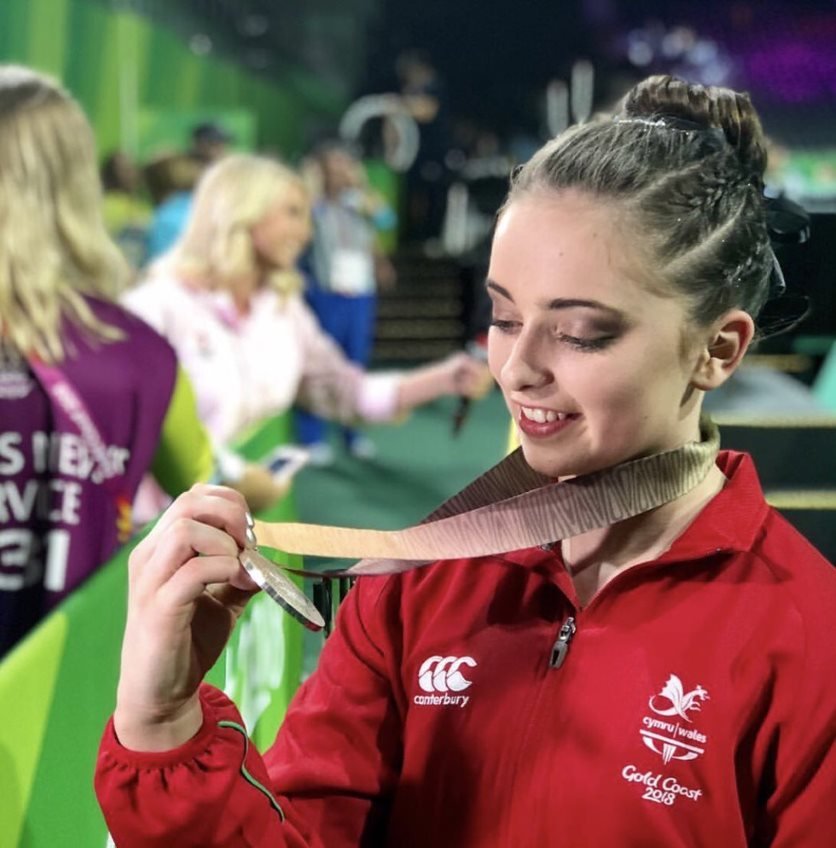 Latalia Bevan with her silver medal at the 2018 Commonwealth Games on the Gold Coast in Australia.

The 19-year-old women’s artistic gymnast from Merthyr Tydfil calls it a day on the back of a stellar competitive career, capped by that stunning silver on floor she brought home for Team Wales from Australia’s Gold Coast in 2018.

But there have been plenty of other highlights for St Tydfils Gymnastics Club’s Wales and Great Britain star, who started out in the sport aged six.

Bevan starred at the 2015 Northern European Gymnastics Championships in Limerick, Ireland, winning gold medals in the individual all-round, team all-round, beam and floor events. That success came a year after also winning the beam title at the same event in Denmark.

She won the all-around title at the UK School Games in 2015 and then 2016 – in the same year she took silver on bars at the Junior Commonwealth Championships in Namibia, also helping Wales to team gold.

More success on beam, silver this time, followed at the British Championships in 2017 while she was Welsh all-around champion heading Down Under less than three years ago.

That performance and floor routine in Australia looked to be the springboard for more success on the big stage, but it ultimately proved to be her swansong. An operation on her Achilles meant a long spell on the sidelines.

Bevan returned at the beginning of 2020 in time for a training camp and competition in the USA, but her comeback was halted again in March, this time by the Covid-19 outbreak.

“It was just after the first lockdown, I felt it was time to finish,” she explained.

“I’d managed to get back and gone to Florida and that was the only competition I’d done since the Commonwealth after my operation – and then Covid happened and there were no competitions.

“It was frustrating and it all got to me a bit to be honest; I just thought I’d rather put my energy into my coaching.

“It was really tough after being out so long because if you’re not competing and producing it’s quite hard to stay at the top.

“It was a really hard decision, but I felt that I’d reached my peak.

“I’ll miss the challenge of it all and just competing with all my friends and seeing what I’m capable of doing and just performing.

“I love to perform, and it’s really strange that it’s all finished.”

In terms of influences, Bevan also had plenty of help along the way throughout her gymnastics career.

She continued: “My parents were just very supportive and basically did everything they could to get me to where I wanted to be and made a lot of really tough decisions along the way.

“My coaches have helped me a lot on the gymnastics side and in real life situations to be honest; Tracey (Skirton-Davies) was a like a second mam to me, I saw her more than I saw my mother! 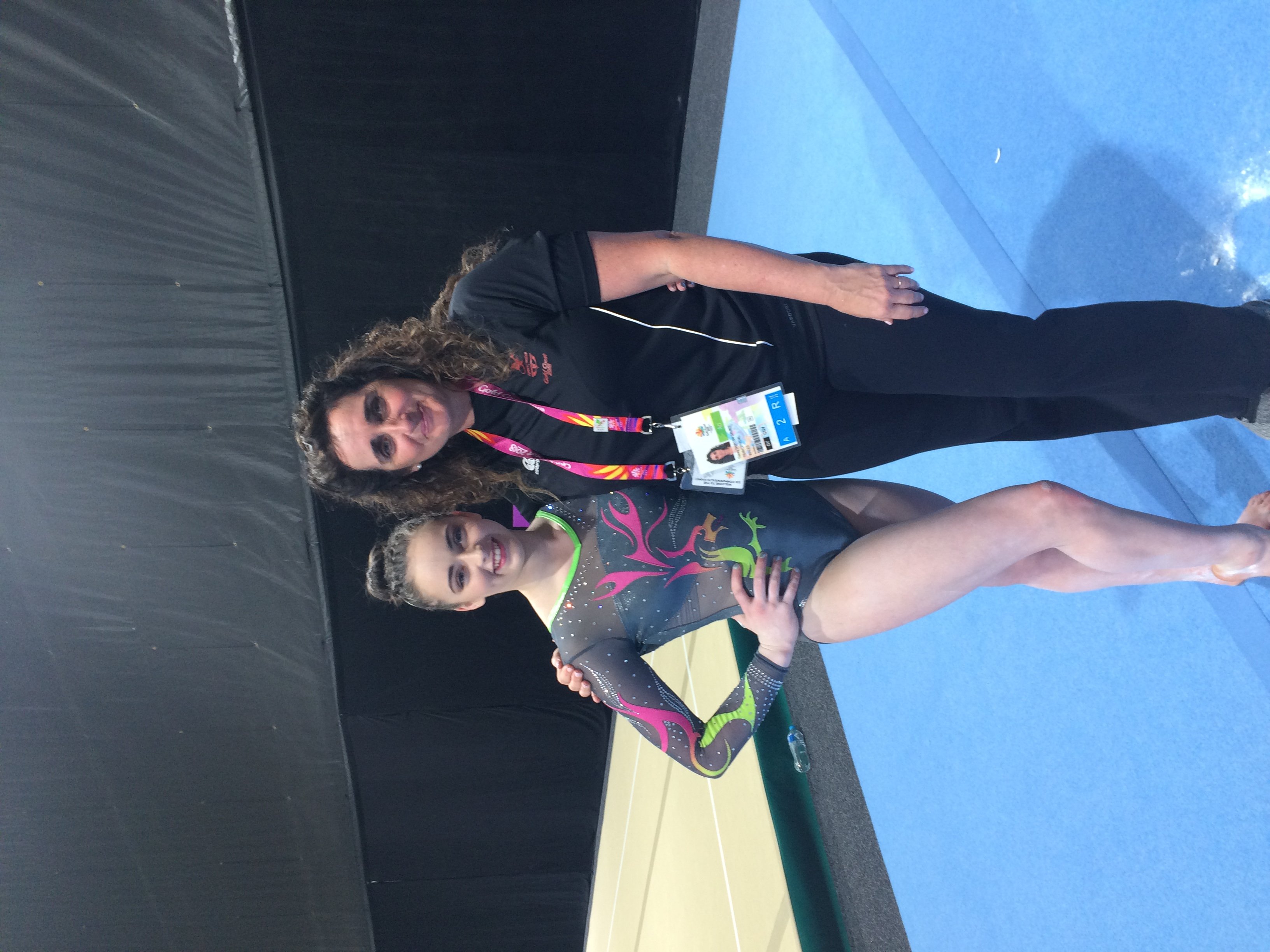 “They’ve all had their different roles that they’ve played and helped me in different ways.”

It was at aged 13 that Bevan made the tough decision to move away from home and her family to Cardiff – while also switching to Whitchurch High School – in a bid to realise her ambitions – in and out of the gym.

“I moved into a house with like 11 gymnasts, some were rhythmic, some artistic and we had a house parent for three years in the build up to the Commonwealth.

“It was crazy and probably the biggest change I’ve ever made.

“But it also meant I passed all my GCSEs and then did my A-Levels, so it’s probably the best thing I’ve ever done for myself.”

The bright lights may have now faded on her own elite career but Bevan, who turns 20 next Tuesday (January 26), plans to stay firmly involved in the sport to help inspire the next generation. She is already a qualified women’s level 1 coach.

Since her retirement, she decided she wanted to help people in her community in the meantime, so has taken on work as a carer to help the vulnerable during the Covid-19 pandemic – alongside her own artistry and choreography business which, like most things, has been forced online for the time being.

She said: “I always want to keep it (gymnastics) in my life.

“I only do a little bit of coaching and obviously at the moment that’s quite difficult.

“I will always be focussing on my artistry business because I love to dance, I love performing. Normally I go around gym clubs, but at the moment I do online Zoom sessions and focus on making young gymnasts confident and help them perform better.

“I focus on the littler things where sometimes coaches don’t have time to focus on in the gym.

“At the moment it’s quite hard to plan with Covid, but I’ve also always wanted to do caring and it’s something completely different, for the experience and to help others out.”

Currently on a gap year, Bevan plans to enrol to study physiotherapy at university next year.

“For me as a coach, the word artistic is central to why I fell in love with our sport and of all the fantastic young athletes that I’ve had the privilege to coach,” she said.

“Latalia embodies the artistry that is at the heart of gymnastics.

“Her elegance and grace was easily seen by all, but she has also put in all the other hard work necessary to get her gymnastic performances to international medal winning level.

“We at Welsh Gymnastics ought to feel very proud that our Welsh-based gymnasts can deliver at the highest level, whatever their background – and Latalia’s major successes demonstrate that we are right to have the highest of ambitions.

“Welsh Gymnastics has supported and resourced a programme enabling gymnasts and coaches to develop and improve – showcasing our country and athletes, quite literally, all over the world at the highest levels of competition.

“Special thanks for the successes enjoyed by athletes like Latalia are owed to the team of coaches working diligently in the background. Coaches such as Olivia Bryl and Mark Calton and also the medical team of physio, Sian Knott, physician, Dr Mark Ridgewell and sports masseur, Beth Dursley.

“In addition, there have been house parents and pastoral care support from the likes of Tina Williams, together with sports science backing at Sport Wales and academic support from Whitchurch School.

“All have helped Latalia, and me as coach, to follow our dreams.

“I have to say that having Latalia’s family in Australia to witness her podium success at the Commonwealth Games was very special and made her fantastic achievement all the more emotional. They witnessed and celebrated her dream come true with her. 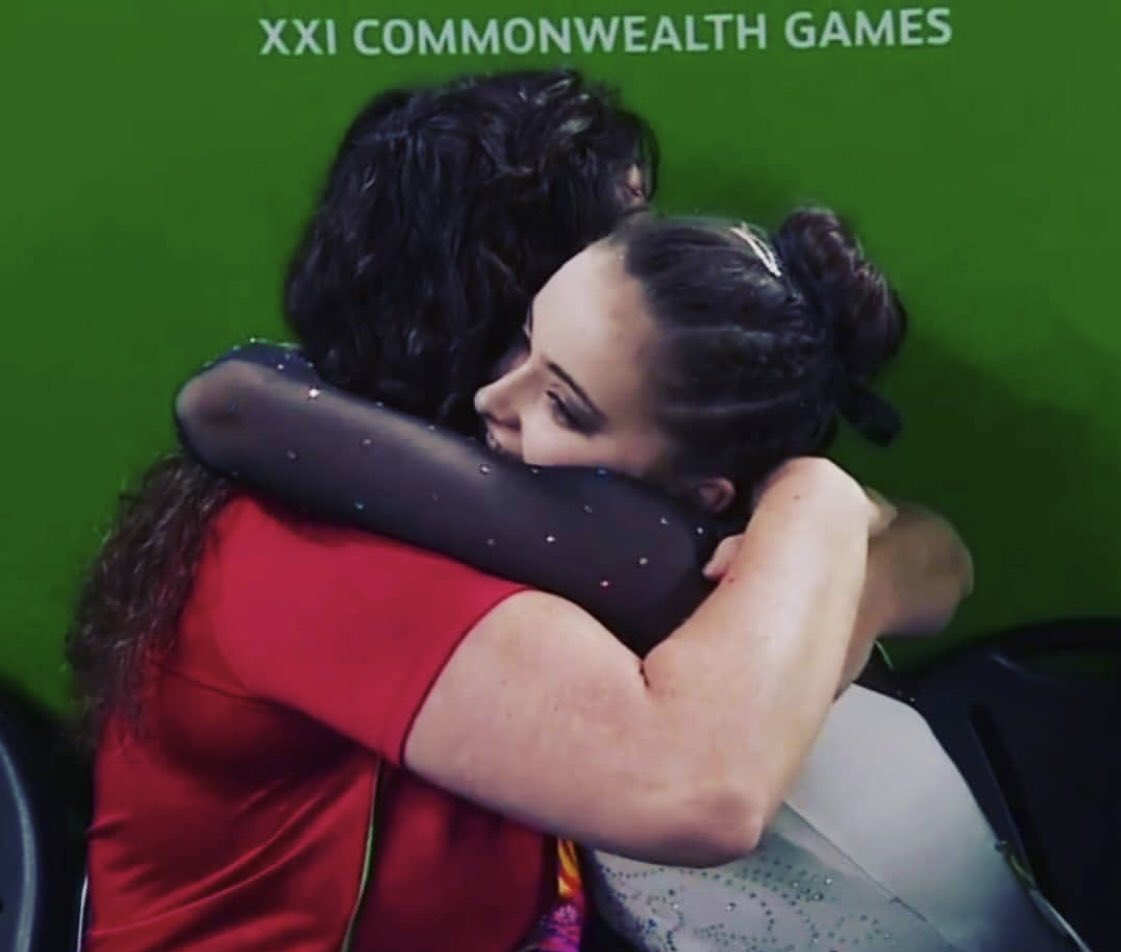 Latalia gets a hug from her coach Tracey Skirton-Davies after her performance on the Gold Coast.

“I feel incredibly fortunate to have been able to coach Latalia from when she was a seven-year-old into the resilient young woman she is today and she will always be a big part of our gymnastics family.

“Ultimately, I’m confident that ‘Tal will continue to make many more amazing memories in whatever path she decides to take.”