Please note: All group pictures featured were taken prior to the pandemic

The COVID 19 enforced lockdown has been tough for everyone, but there have been a few glimmers of light that have shone through the collective gloom.

One of those shards has been in North Wales, where the Deeside Gymnastics Academy has met adversity head on and looks set to come out of the pandemic on top. Where once there was doom, now there is hope, where once there was despair, there is now renewed zeal and enthusiasm for the future.

At the heart of never-say-die action from one of north Wales’ premier clubs is stalwart Joy Sumner. Despite admitting that at one stage last year she “sat down with a glass of gin saying we can’t possibly do all this again”, now she is only getting heady at the prospect of what might be possible for the club when life finally returns to normal.

The roller coaster ride of the past 18 months has seen the club initially turned down for a grant to build a new home, turfed out of their established base and then forced to abandon all classes and coaching because of COVID.

Things must have been bad to get Joy, one of life’s eternal optimists and ‘can do’ people, to say this is impossible. But with help from her colleagues at Welsh Gymnastics, the overwhelming support of the Deeside Gymnastics Academy ‘family’ and the enthusiasm and expertise of fundraising genius Steve Spencer-Hughes and their fundraising team, the future for the club now looks “bigger, brighter and better than ever”.

Founded in 1974 by Ernie Cookson, the Deeside Gymnastics Club has flourished through hard work, dedication and a rather special family atmosphere. It all began when Ernie and his team of gymnasts and trampolinists were invited to perform at the opening ceremony of Deeside Leisure Centre in 1973.

Since then, the club has produced a string of Welsh, British, World Age Group and European champions, has three satellite sites and caters for over 500 members across the age groups. Deeside Leisure Centre was the club’s home until 1986, when it moved to the Hawarden Institute. After five years there they spent a decade at the old Co-Op buildings in Queensferry.

As they grew, they returned to a more bespoke facility at Deeside Leisure Centre at the start of the century. It suited their needs, although constraining them slightly it was where they were set to be for the next century. But their ultimate dream was always to have a bigger and better facility in which they could grow. 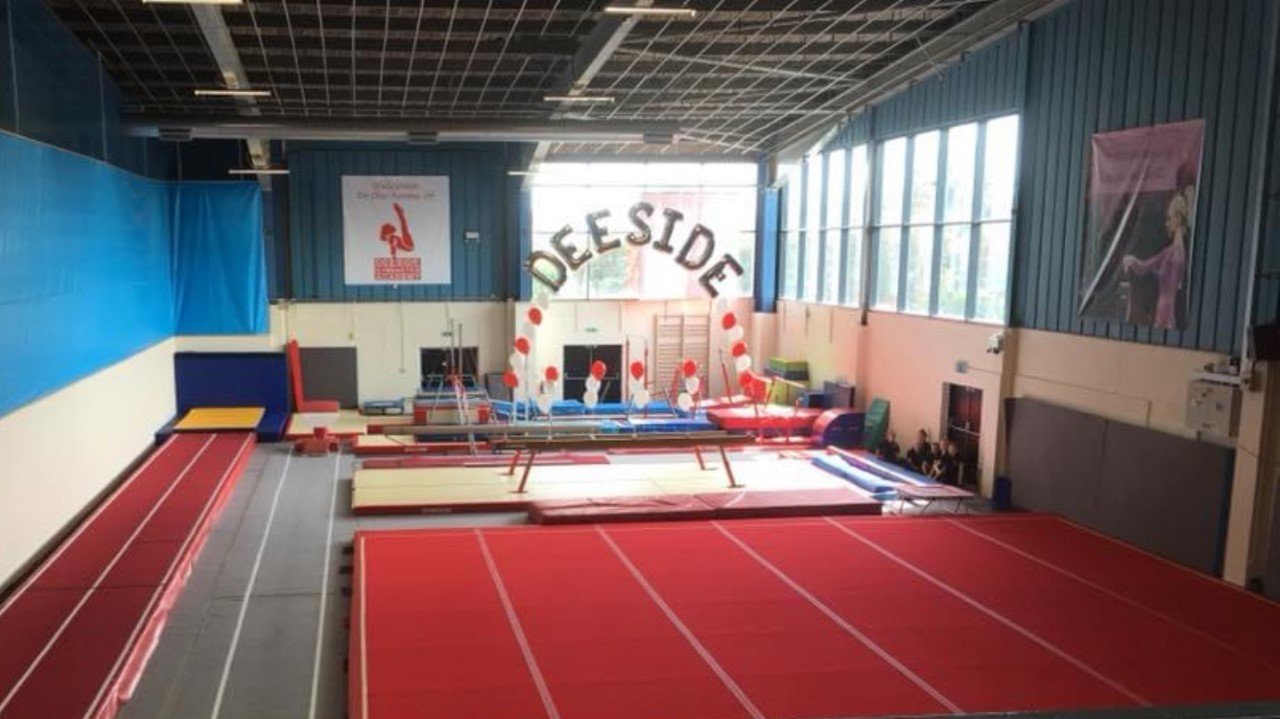 To do that they needed help and support, which arrived from both British and Welsh Gymnastics when their world was almost turned upside down at the start of the pandemic.

“We had been at the Deeside Leisure Centre for the best part of 45 years, yet within three weeks it was taken over and turned into a hospital – and will be so for a long while yet,” said Joy.

“We were told on 2nd April last year that we would have to clear the gym out the next day and on the 3rd April it took just four hours to take our great club and a thriving business to be put into storage to leave our beloved gym as an empty room. 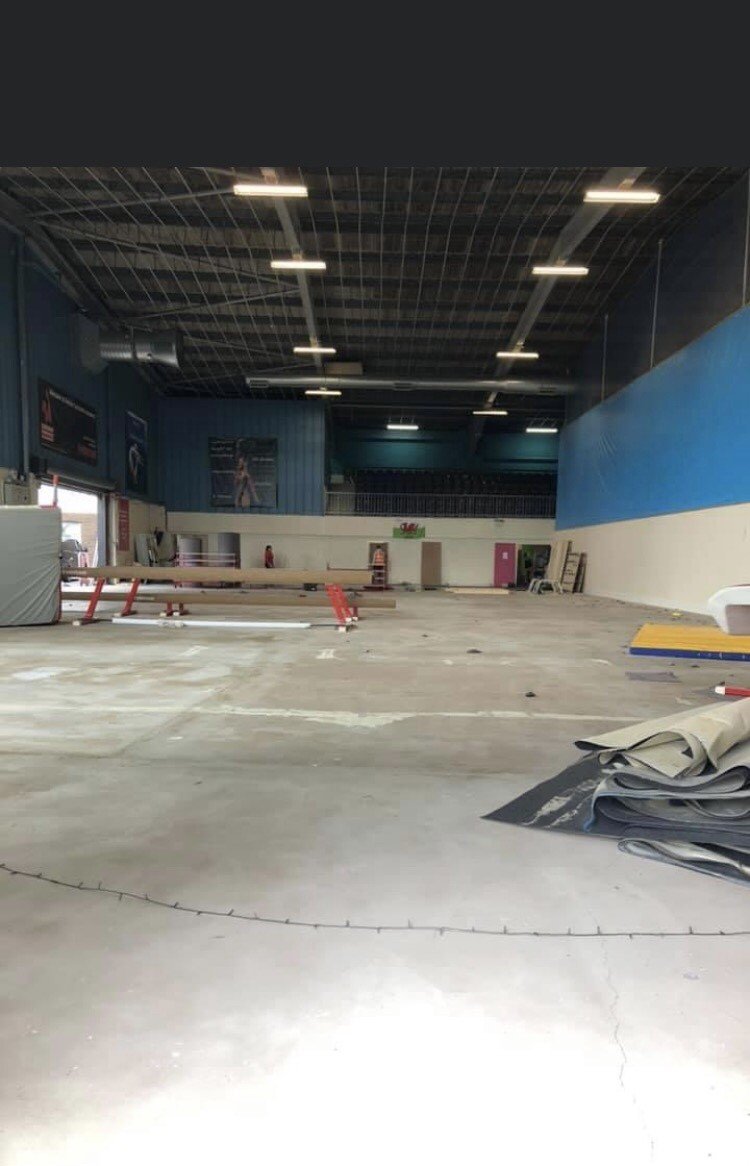 “We had £80,000 worth of equipment in our facility at Deeside Leisure Centre and there were workmen coming in to rip it out to make way for the hospital. It has been a crazy time for everyone.

“It meant we had to find a new home, temporary at first and then with a view to a bigger and brighter future. We started from scratch at the leisure centre and now we are doing it all over again.

“All our classes and sessions at Deeside LC have been stood down because of COVID, but we opened a small gym in Sandycroft just to keep our higher level of competitors fit and engaged. It is compact to say the least, about half the size of a gym floor, and we will keep it going for a while as the work on our new unit continues.”

That new venue is in an old industrial unit on the Aviation Business Park in Deeside. Having found it, the big dilemma was how to pay for the improvements needed to bring it up to scratch. Initial bids for Welsh Government and National Lottery grants weren’t as successful as hoped, with £3,000 offered, in the context of the Phase 1 improvements topping £50,000. 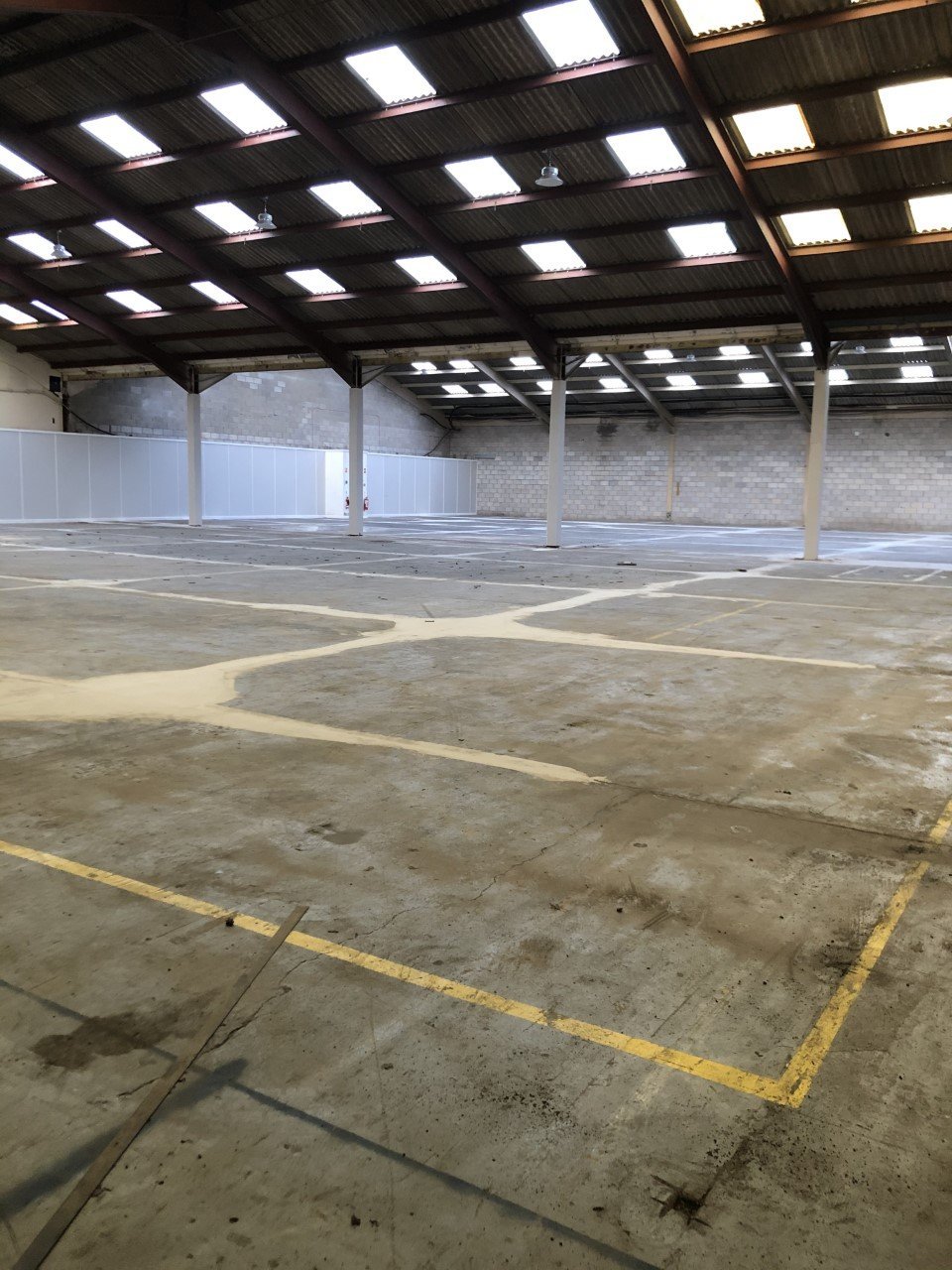 But Ernie and Joy’s team weren’t beaten yet. They joined forces with Welsh Gymnastics, who stated their case, championed their cause and accessed alternative funds, and a new offer was made of £38,000. The move to a new home was finally up and running.

“Against the background of everything that has gone on during the COVID pandemic, ours is a happy story in parts. If it wasn’t for Welsh Gymnastics and Sport Wales we wouldn’t be going into our new building,” added Joy.

“I’ve worked for British Gymnastics and Welsh Gymnastics down the years and it is good that the governing bodies have been so helpful and shown there is a strong bond between them and their clubs.

“If there has ever been a time that Ernie and I needed help this was it – and they backed us.’’

“Our children and their parents have also been amazing and done so much through lockdown. They have helped to raise almost £15,000 to go towards the cost of fitting out our new home. 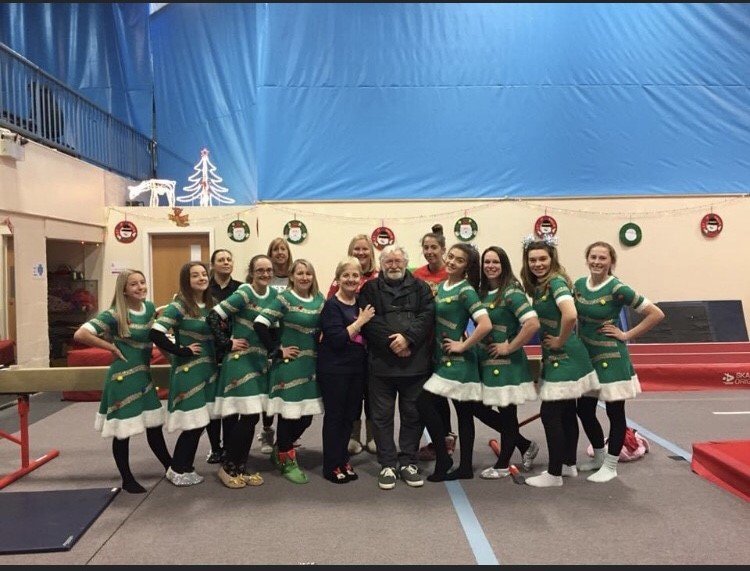 “Phase 1 has been all about making the building clean, warm and safe, getting the walls up and the floors down and moving in the equipment. With the Aviation Park making the building safe and watertight. Phase 2 will come next year when we start taking some money again. A balcony for spectators, disabled toilets, offices and a café will be some of the features in this phase.

“The grant money we have received has made our new home warm, clean and fantastic. When life gets back to normal, we will be in our new home – it will be a new chapter in the life of this great club, a step forward into what we all hope will be an even bigger and brighter future.” 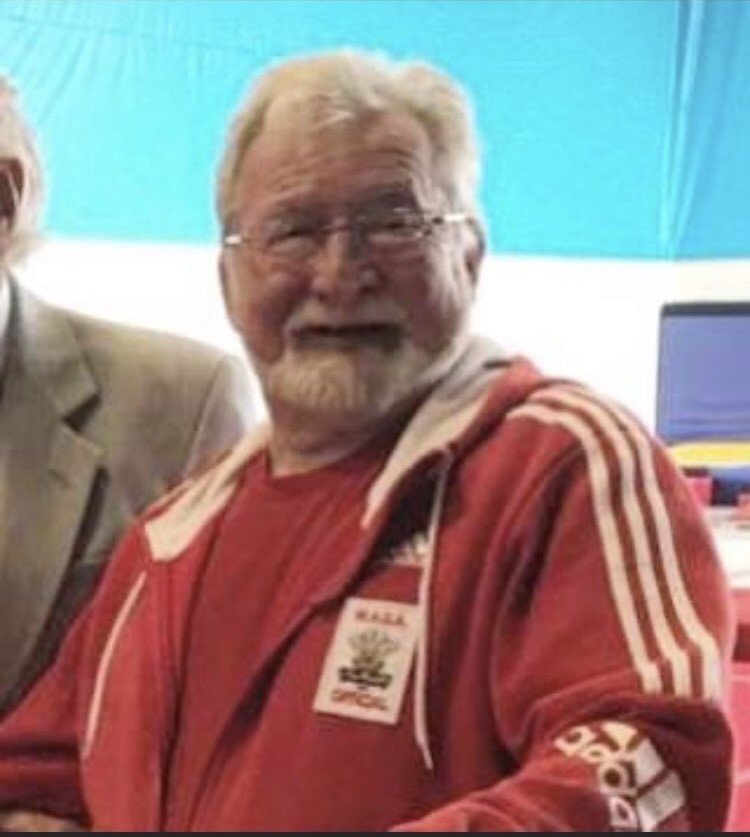 When Ernie Cookson, pictured above, started the club almost five decades ago there were 20 only people in the club. Before lockdown came there were over 500 regulars across the club’s sessions. After 30 years of volunteering, Ernie and Joy now head up the team at the club on a more professional and sustainable basis – and inviting Clare Rudd, a former gymnast with the club, to join them as a director.

It means that when they are able to get back to doing what they love, and do best, there should be a seamless transition for all the children and adults who take part.

“I thought we had got to where we needed to be in Deeside, but we will have three times the space in our new unit. It will open up a whole range of new possibilities for us and will allow us to host competitions and courses bigger and better than before,” added Joy.

“Deeside Leisure Centre was where the club was born and where we grew up. We’ve been in different locations, but all within a three-mile radius of our beloved home. It has given us a great legacy and we have to keep the club going.

“We are determined to emerge from this difficult period intact and ready to push forward. We’ve got a fantastic team of coaches, volunteers and helpers and we are more like a family than anything else. I simply can’t speak highly enough of them all.

“We have always had our own wonderful gymnastics bubble even before bubbles became a thing. 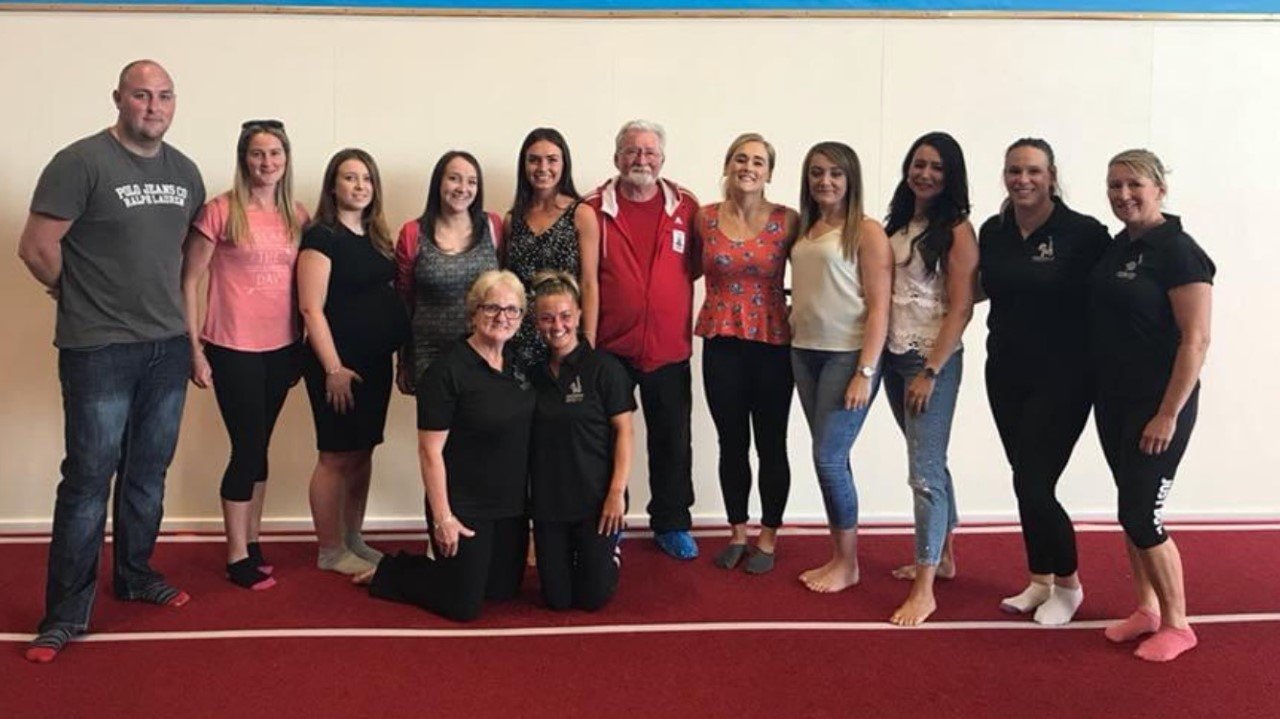 “For the first 30-35 years everything we did at the club was voluntary. It was very much a community club run by dedicated volunteers. The ethos and ethics of the old club still exist, but the sport has moved on to become a business that needs professional guidance.

“We changed the structure of the club about six years ago when we first had our own facility in the leisure centre. There were always great stalwarts and a committee at the club, but we had to try to keep up with the rest of the world. If we hadn’t changed, we would have been left behind and the club might have been in danger of dying out unless we put an updated plan in place.

“But now we have a proper structure, specific roles and responsibilities and there are 14 coaches and a management team. When our new facility opens the sky really will be the limit for us.

“I just wish we had a bit more money now to get even further ahead while we are in lockdown. You just have to be positive and surround yourself with good people. You just wouldn’t believe what we’ve got planned for the future – classes for children with special educational needs, children that are home schooled, pre-school classes, men’s artistic and trampoline classes as well as our usual offering of women’s artistic, tumbling and recreational gymnastics classes.”

While Ernie, Joy and their colleagues know everything there is to know about running a successful club, the one area in which they needed support was on the fundraising side. That’s where Steve Spencer-Hughes came in. A nuclear engineer, he is the typical parent turned volunteer that become so important at so many clubs.

With his daughter, Esme, an active gymnast at the club he was encouraged to get involved in helping to raise funds at the club. He learned all about the form filling required to apply for grants and followed Joy’s example of ‘never give up’.

“We set up a fundraising committee 18 months ago and I became the Volunteer Fund Raising Manager. We had a Christmas fair, online quizzes – anything to keep everyone together and to raise a bit of cash,” said Steve. 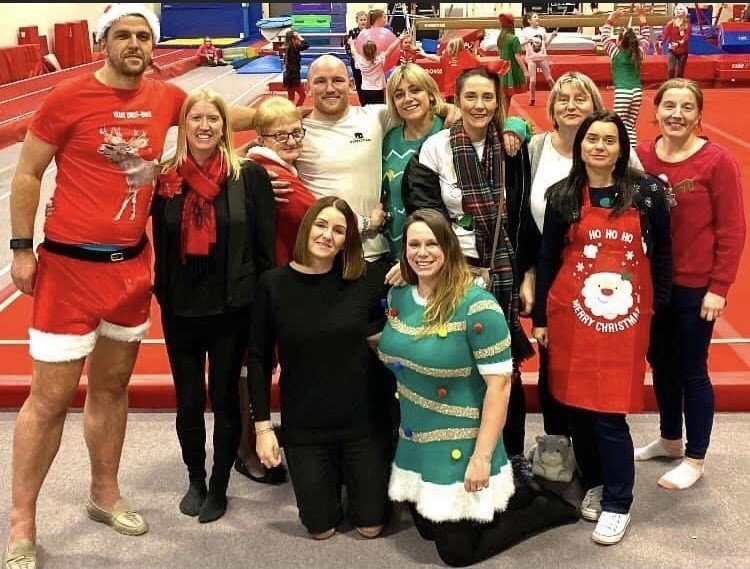 “We are in an economically depressed area and the club offers so much to the community. After our gym was repurposed as a COVID Nightingale hospital we applied for 15 different grants, being offered £3,000 due to the cap on the funds available to us. We knew we would need more.

“We reached out to Michelle Fulford, the CEO at Welsh Gymnastics, who was fantastic.’

“Michelle knew that we had felt that turning the building into a COVID hospital was a worthy cause, but also how difficult it had been for us to have to leave our premises, given the unique and pivotal role we play in our community. We worked together and, with the Welsh Gymnastics team behind us, we were awarded £38,000 from investment they had managed to secure on our behalf.

“Our new home was as bad as it could have been when we took it over. It was an empty shell; the floor needed levelling and it had a leaking roof. The heating system alone has cost £60,000.

“We had probably outgrown where we were, but we were very comfortable there. The way the club has stuck together has been fantastic and we’ve raised some significant funds to go towards the refurbishments. This new development is going to be huge for the kids.”

So, here’s to the next chapter of Deeside Gymnastics Academy.

Sally Church steps down from the board of Welsh Gymnastics
Welsh Gymnastics Commonwealth Games 2022 nomination and selection policy released
Children’s Mental Health Week: ‘A light had been dimmed, we needed support’