The coronavirus forced shutdown meant more than 550 days had passed since the last major artistic championship.

But it proved to be a memorable return to the big stage for some of Great Britain’s top artistic gymnasts, who brought home six medals in total – led by the incredible emergence of 16-year-old Jessica Gadirova.

There may not have been any Welsh representation in either the MAG or WAG teams this time, but Wales was represented in the Great Britain contingent in Basel – in the shape of Olympus Gymnastics Club’s Paul Edwards.

Wrexham based Paul, head coach and director alongside wife Julie at the Llay club, was on the panel of judges for the men’s event.

As well as being a high-performance coach, Paul is a top international men’s artistic gymnastics judge, otherwise known as a Brevet judge, and judges regularly for Great Britain and Wales on the international circuit.

He was head judge on floor and vault at the Gold Coast in 2018, his fourth Commonwealth Games, while has officiated at multiple European Championships and World Cup events around the world for Great Britain.

Paul is one of only two qualified men’s artistic Brevet judges in Wales. Jan Davies, also from Wrexham, is the other.

But, despite having been a Brevet judge for the best part of two decades, last month’s Europeans in Switzerland were in stark contrast to anything he has ever seen or known before.

A major gymnastics competition was back on the agenda, but not as it was 18 months earlier.

“It was really worthwhile experience and was very enjoyable to be back and good to have the chance to speak to international friends again,” said Paul.

“The event was very well run and organised.

“It was highly Covid organised, and that was just the paperwork!

“The paperwork to travel was immense; we needed to have visas, declarations to travel, locator forms, where we’re staying and why, work permits and elite sport dispensation from the government.”

Paul departed the UK on April 18th and returned on April 26th – when he was then required to isolate for 10 days.

A vastly different experience was awaiting on arrival in Basel. So what was it like judging at a major gymnastics competition during Covid times?

“The first judges’ meetings once we got there, which you always have to attend, were held via Zoom, which was completely different,” continued Paul.

“Along with our normal competition photo accreditation and field of play access pass, we also had Covid stamps – pieces of paper stamped on the back to say how many days you are down for being Covid free.

“So every time we had a test we got a couple of days’ stamps on our pieces of paper.

“You had to show all your credentials and stamps at nearly every doorway and also have your temperature checked.

“In one 48-hour period, I think I had three Covid tests. 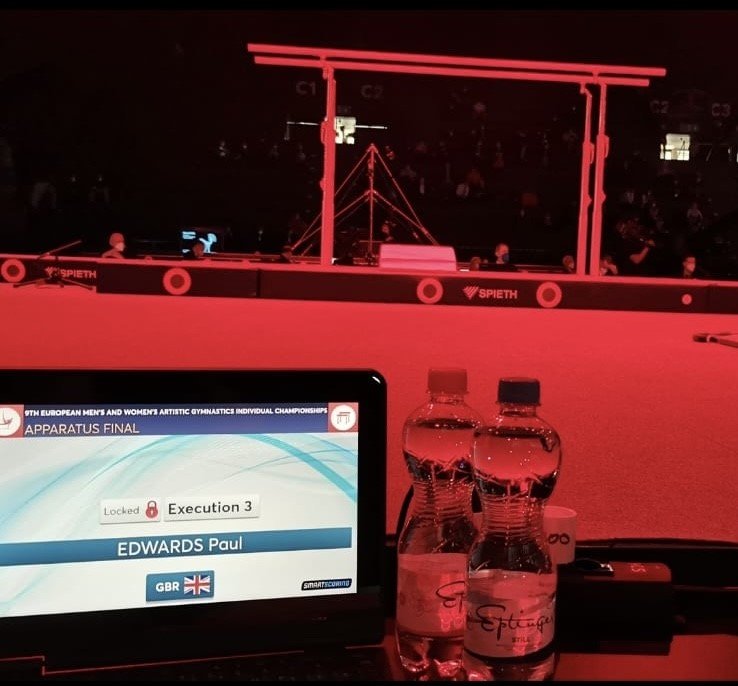 “Then we had to keep socially distanced, wear high grade masks and there was obviously not shaking hands or anything like that.

“There wasn’t any socialising at all, trips to a bar, or to the shops or anything like that allowed on the trip for obvious reasons, but we were able to go for our walks for our exercise, that was it.

“In the venue it was all socially distanced. I think Switzerland is 1.5 metres but we stuck to the two-metre rule as BG and the British Gymnastics party ate in an area that was not utilised by any other party.

“But, as I say, it was a really enjoyable experience and very well organised.”

Now back home in north Wales, it has been a big week for Paul with the Olympus club reopening its doors to members, while he also coaches 18-year-old son Jacob – the 2019 U16 all-around British champion – who is on the Wales Commonwealth Games Long List for Birmingham 2022.