It was a weekend to remember for Phoenix Dance and Gymnastics at the 2022 Aerobic British Championships in Stoke-on-Trent. 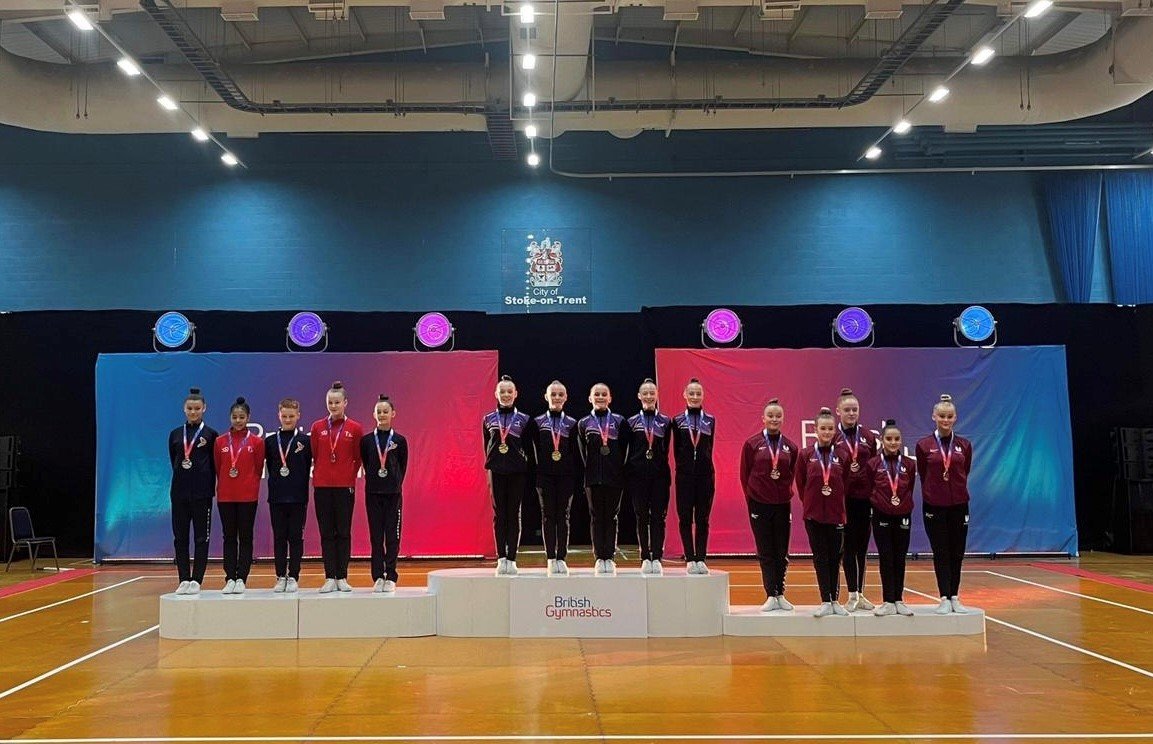 After the competition, the gymnasts said: “It was amazing to be standing the podium.

"We were proud of ourselves; we have worked hard knowing that we are new to the category and there are gymnasts that we look up to in the category from other clubs, so we were excited and proud to bring the medal home to Wales and Phoenix.”

“I am so proud of the girls,” said head coach Laura Morgan.

“Their resilience over the last few years has been incredible and shows their love and dedication to their sport.

“This is the culmination of hard work and determination by every one of them; some of the girls have only been selected into the FIG category recently – so this is an even bigger achievement for them.”

Before each competition day, a mark of respect and moment of reflection was held, to show condolences following the passing of Her Majesty Queen Elizabeth II on Thursday 8th September.

Over two busy days of competition at Fenton Manor, gymnasts as young as nine all the way up to senior level, took to the aerobic floor to impress the judges.

The Phoenix National Aerobic Code gymnasts also had a brilliant weekend, with the NAC National Development (10-11 year old) trio Ffion Llewellyn, Lila Harris and Olivia Lacey topping the podium with a gold in a category full of talent – a fantastic result for them. 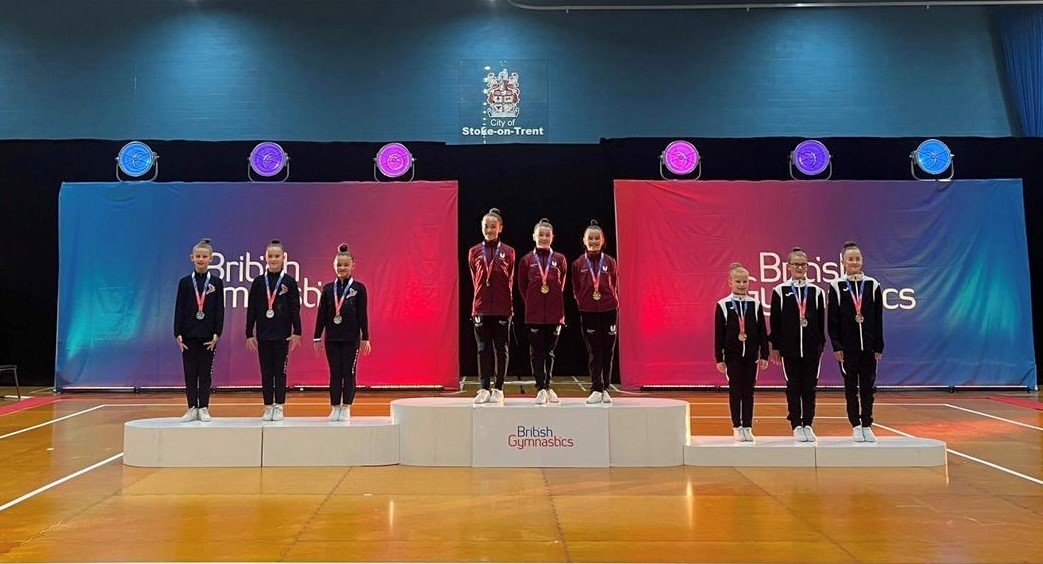 Meanwhile Brooke Pritchard, Brianne Evans and Harriette Jones, the club’s youngest gymnasts at the competition, also went home with a gold medal in the Foundation category at just nine years old – some future stars to watch out for! 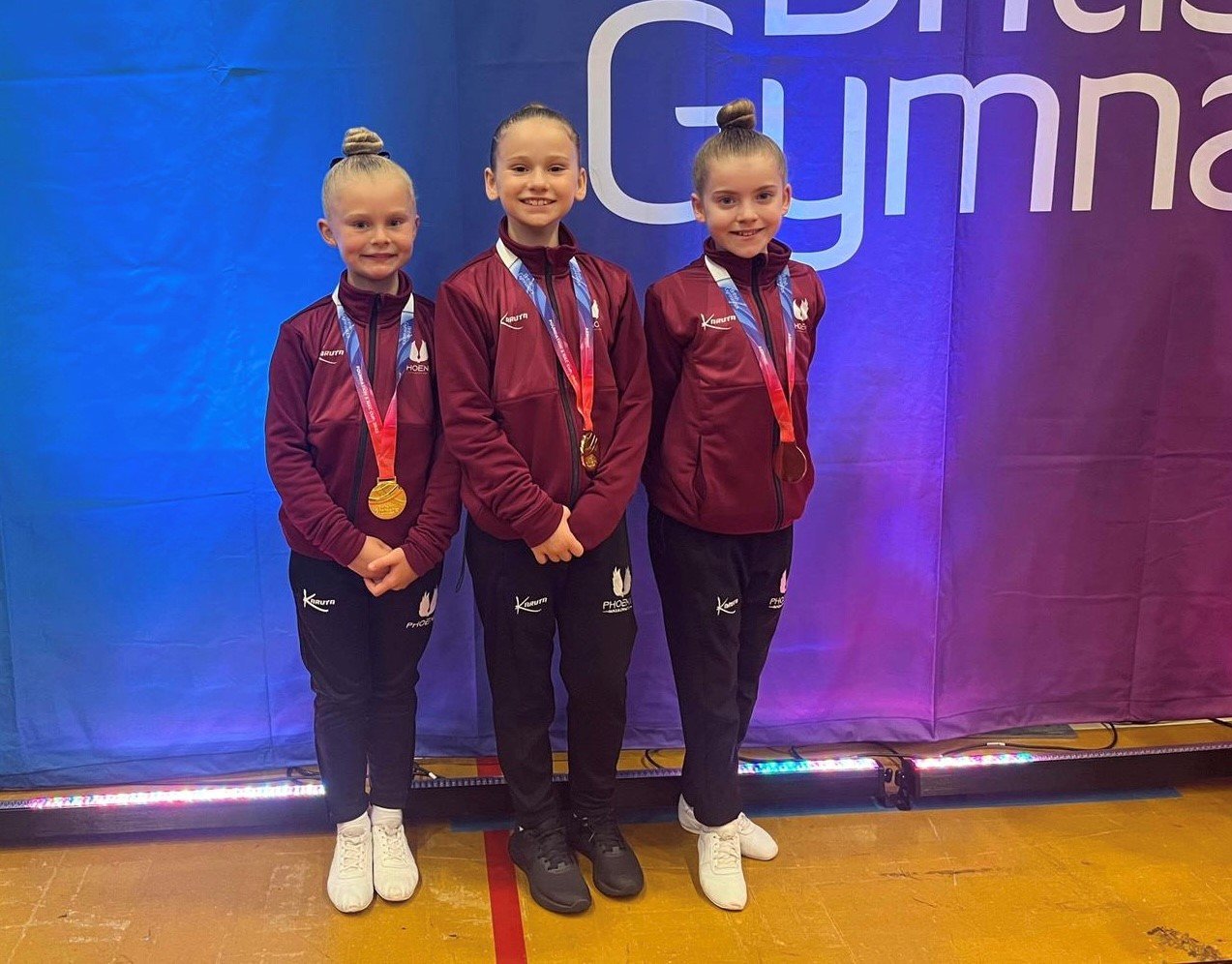 Phoenix were also mightily proud of Emily James, who competes for the Bulmershe club as well as being an assistant coach at Phoenix DGC, after she secured herself a brilliant British bronze medal in the FIG senior individual women’s category following a strong routine.

Emily’s coach at Bulmershe, Kerry Scotts, said of her performance: “After having a difficult year with a major back injury – and having to withdraw herself from the World Championship trials earlier this year – she has overcome her injury.

“She’s had a fantastic season culminating in her best routine of the year at the championships; showing her natural performance and her musicality, her dance qualities and as a natural aerobic performer.

“She is looking forward to 2023 and trialling for the European Championships as part of the senior trio and a group.

“Emily travels weekly to Basingstoke GC and Bulmershe GC in Reading from South Wales to train and her dedication is unparalleled.”

In the same FIG senior individual women’s category, Phoenix DGC’s Mia Bernardo performed a beautiful routine at what is her last British Championships.

Mia, who was part of the Great Britain senior group along with Emily at last year’s Aerobic European Championships, will be hanging up her Aerobic shoes following the Welsh Championships later this year to concentrate on coaching, as well as passing on her knowledge and experience to the next generation of Phoenix DGC gymnasts. 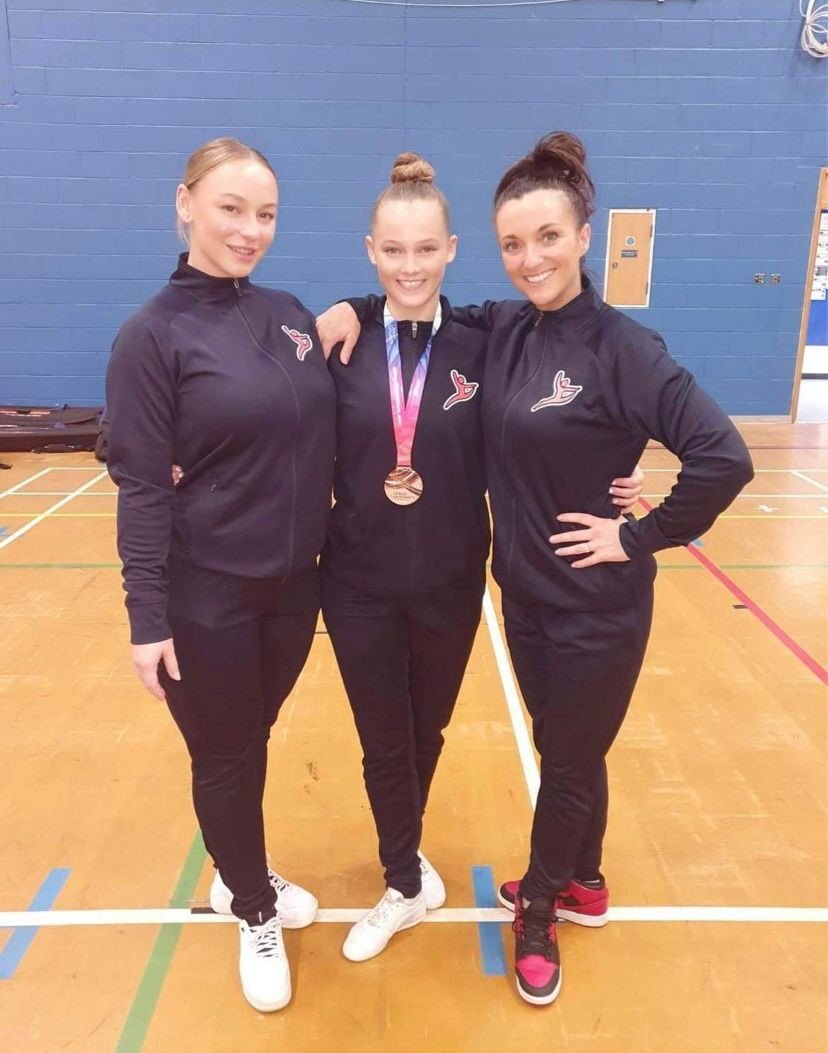 The FIG junior trios of Ella Pritchard, Lowan Davies and Lilly Jean Smith of Weston Aerobic GC, along with Kate Jones-Darch, Isabelle Davies and Alessia Polledri, performed well in the category; a few mistakes meant they weren’t on the podium at this competition – but watch out for them at the Welsh!

NAC age group (12-14 age) group gymnast Phoebe Beckell took the gold with her Basingstoke team mates, with the Phoenix gymnasts Holly Williams, Jessica Reddy, Lillie-May Lloyd, Nia Bevan and Niamh Reynolds – who was a last minute replacement due to Seren Thomas suffering an injury the week before the competition – doing well in a hard-fought category.

Holly Williams, Jessica Reddy and Lilly-May Lloyd, in the NAC Age Group Trio category, narrowly missed out on a medal by 0.1 following a lovely routine from them which they were pleased with.

Assistant Phoenix and Home Nations coach Emma Pritchard said of all the gymnasts: “All of the gymnasts had targets to reach in their routines – and they surpassed all expectations.

“Every one of them leaving the competition floor with a smile on their faces; this is what it is all about – the opportunities and the experiences.

“I am proud of them all and certainly shed some tears over the weekend.”

Congratulations to all involved across a fantastic two days.

Full results are available HERE as well as on the BG Score App – where all of the gymnasts’ routines from over the weekend can also be watched back.

Read the British Gymnastics report on the weekend HERE.